Elmer 'Pa' Angel was the patriarch of the Angel Gang, a family of dangerous criminals originally from Texas City who preyed on travelers making their way across the Cursed Earth. Pa was enormously proud of his children's' violent behaviours and in general wickedness, and as a result would encourage it as often as possible, considering it a strength and a virtue.

The man who may or may not be "Elmer Angel" was a career criminal in Texas City with a wife and teenage daughter, and worked with the corrupt Judge Hess. In 2075, Hess planned for Elmer to rob the Southern Angel Depository bank and "escape" his Judges - and when Elmer tried to refuse the job, his family were taken hostage. The daughter died in custody during the robbery, so Hess double-crossed the gang and had them gunned down. Elmer, badly wounded, was able to flee the city with the money (killing several Judges in the process) and made it to the Cursed Earth. He was found and dropped off at a charity hospital by Filmore Faro. The hospital staff, hearing him mutter "Angel" in his sleep, took this to be his surname.

While recovering, he bonded with mute, orphaned boy nicknamed Lincoln (whom he called "Linc") who was suffering from trauma after his Helltrek family were killed. 'Mr Angel' himself had only patchy memories of his past.

When Hess caught up and began torturing him to find where the money was, Angel requested that he let Linc see him get tortured so the boy could see the world he lived in. Unknown to Hess, Elmer was covertly instructing Linc on where to find his gun and how to prime it. With Hess wounded and left to die, Elmer - having learned from a mutant that he'd sire a large, influential brood - continued with Linc into the Radlands to find Linc's "brothers".[1] The mutant psychic implied before his death that time had already changed from how it should go. [2]

Soon after this, 'Mr Angel' encountered a brutal patriarch named Kreeg who abducted young boys into his 'clan' and training them to be degenerate killers - girls were sold to slavers as they couldn't be 'proper Kreegs'. 'Angel' violently preventing Brand Kreeg from snatching children led to the Kreegs launching a retaliation attack. The town 'Angel' had been living in was wiped out and Linc abducted, but 'Angel' survived and tracked the clan to its home. As they wouldn't hand the children over, 'Angel' wiped out all of Kreeg's brood.

Before killing Kreeg, 'Angel' rejected his idea that they were similar and said he could enver be him. Unknown to either man, Kreeg also had many similarities to the future Pa Angel and his 'family' included members resembling the yet-unborn Mean, Fink, Junior, and Link Angels. [3]

Whatever the case, Elmer Angel and his new wife, Ma Angel, were at work in the Radlands in the 2080s. They worked for desperado Dil Grimzi but resented working for someone who wasn't family. According to Angel, they decided to go their own way after Fink Angel was born and he had "an extra face t'fill". Pa Angel betrayed Grimzi and left him for the Gila Munja, with toddler Fink in tow to watch.[4]

Pa, Ma, and the boys set up shop in a Badlands shack. 'Ma Angel' died when Junior Angel was born and soon after, Fink decided to live in a hole in the ground - both things that Pa took great pride in.[5] As Junior was youngest, Pa began to baby him - while ignoring his eldest, which is the real reason Fink ran off.[6]

In an attempt to make his boys into killers, Pa would beat them, set dogs on them, and shoot at them as "combat training". Unfortunately for Mean Angel, Pa was disgusted by his quiet, passive personality; he once beat Mean 'for his own good' for petting a kitten and encouraged the other Angels to terrify and torture Mean. Eventually, on Mean's twelfth birthday, Pa Angel kidnapped a surgeon from Texas City and forced him to perform surgical modifications on his son, transforming the once gentle boy into a brutal sociopathic cyborg. This included cutting Mean's arm off - when his son cried in fear, Elmer told him he was getting a better one. Mean would go on to see the abuse as "the happiest days o' my life".[7]

Sometime after this, the gang found themselves on the run from the law. As a result Pa hatched a plan to kidnap the mutant boy known as the Judge Child and profit off him. Pa eventually decided to trade him to the Grunwalder, the machine ruler of a robot kingdom on the planet Xanadu, in exchange for sanctuary. Unfortunately for the Angel gang, Pa and his boys were pursued by Judge Dredd who had chased them halfway across the galaxy to find the Judge child and bring him back to Mega-City One, which put him at odds with the Angel gang; who weren't willing to give him up so easily.

As Dredd pursued the family across Xanadu, he dispatched each member of the gang one by one, killing most of Pa's offspring and at one point even managing to wound Pa himself with a long rifle. Eventually Dredd caught up with Pa and his youngest son Junior who at this point were the last two (known) survivors of the Angel gang and confronted them at the entrance steps to the Grunwalder's fortress stronghold. During this encounter both Pa and Junior were supposedly killed by Dredd with Pa falling into a volcano and meeting his apparent demise.[9]

In 2106, the Judges brainwashed Mean into thinking Dredd was Pa Angel so he'd lead them across the Badlands. [10]

Years later, it was revealed (rather controversially) that Pa and his youngest son Junior Angel had actually survived their apparently fatal fall into a volcano and been stuck in suspended animation. They were revived and used to convince Mean Machine to cooperate with Dredd - and then were thrown in the cubes.[11] They were housed in Iso-Block 666 and were so obnoxious, the Devil couldn't stand it and teleported Dredd to their cell. (This backfired as now Pa Angel wanted to be in the Devil's gang) [12] They haven't been seen or referred to since, and you can honestly ignore the last paragraph because Tharg has. 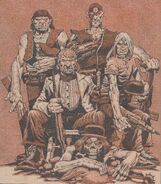 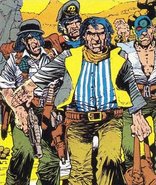 Add a photo to this gallery
Retrieved from "https://judgedredd.fandom.com/wiki/Elmer_Angel?oldid=12390"
Community content is available under CC-BY-SA unless otherwise noted.