Fink Angel was the eldest son of Elmer 'Pa' Angel of the Angel gang. He was the most mutated of all his brothers.

Fink was a tall looming figure with a thin skeletal figure, he had brown bleached skin, red eyes and long white hair, his teeth were visible and was missing his nose. He often wore a bowler hat.

Fink was a born loner and disliked the company of others, even his own family - he shunned them to live in a hole and murder passers by. He also made friends with one of the Cursed Earth rats which he named Ratty. He felt enough duty to his family to swear vengeance in their name.

Fink was the eldest son of Pa and Ma Angel, and was taken along to watch his father leave Dil Grimzi for the Gila Munja. As with all Angel boys, he was abused and trained to be a killer from an early age.[1]

Unlike the rest of his family, Fink was a loner and grew to dislike spending time with his family - the main cause was juniors birth as Pa began ignoring him in favour of the youngest. Fink up and abandoned the family, deciding to live in a hole that grew further and further away from the shack. Unaware of the reason, Pa Angel just took pride ("that's my boy!") that Fink was going off to live in a hole and threatened to kill him if he tried to stop him.[2]

Fink wandered from hole to hole in the Cursed Earth, where he would spend his time moving from hole to hole. He made a living by robbing and murdering unwary travelers as they passed by. His preferred way of killing was to poison his victims using a lethal range of powerful toxins. As a result of his time spent alone in the irradiated wilderness, his body and mind became warped over time as he degenerated into a vile creature less than human.

Whilst living in the Cursed Earth, Fink came across a mutated rat which at first he resolved to eat. After discovering that the creature in fact liked him, he adopted the rat as his companion. He named the creature Ratty, with the rodent being his first and only friend.

A number of years later. Fink found out that Judge Dredd had wiped out the rest of his family. Although he never loved his father and siblings, he felt duty bound to avenge his kin and set off with Ratty to Mega-City One to murder anyone involved in the deaths of the rest of his relatives. Upon reaching Mega-City One, He successfully managed to track down and murder Judge Larter: one of Dredd's companions from the Judge Child mission. He paralysed Larter using one of his poisons, before feeding him to hungry sewer rats which ate him alive. After that, he managed to abduct Judge Hershey and attempted to kill her by processing her at Resyk but was thwarted by Dredd before he could carry out his plan.

After defeating Fink, Dredd took him into custody and sentenced him to life in an iso-cube. Ratty however managed to escape justice and spent some time afterwards living comfortably in the shadows of Resyk, feasting on the corpses that were processed there.

The Judge Child later used his powers to ensure Fink's escape from the Iso-Cubes. Teaming up with his resurrected brother Mean Machine; they kidnapped Maria (who they mistook for Dredd's wife) and lured Dredd into a trap in their underground lair. The two argued briefly on how to kill Dredd before agreeing on using the Pa Angel Mark One Super-Scream Torture Machine. Dredd freed himself and defeated Fink in combat, finally throwing Fink into the torture machine. Fink didn't survive the experience.

In a parallel universe, Fink went on to lead a mutant army that burned Mega-City One to the ground. He left his Dredd paralysed and had Ratty eat through his throat. When he was later contacted by another reality's Murd the Oppressor to join a team of Dredd's enemies under Cal's leadership to get revenge on any Dredd that had won.

When the group confronted Dredd in the main reaity, Fink stopped Don Uggie Apelino from shooting him so Ratty could kill him. He was then shoot by Apelino, then killed when Dredd shoved Ratty down his throat. 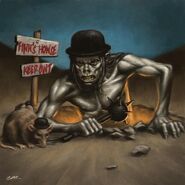 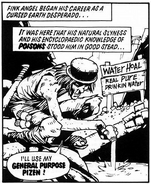 A young Fink Angel displaying his preferred method of killing. 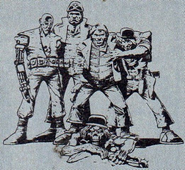 The Angel Family: (That thar at the bottom is Fink!)

Partners in crime.
Add a photo to this gallery

Retrieved from "https://judgedredd.fandom.com/wiki/Fink_Angel?oldid=12249"
Community content is available under CC-BY-SA unless otherwise noted.