Volt was the perfect Judge to reform the Justice System which under his two predecessors had become badly corrupt and damaged.[1] Ultimately however he simply was not up to the job of wartime leader.

Volt became a Judge in 2096 and fought in the First Robot War and the Apocalypse War. in his early career, he was accused of unlawful execution: Cal, then running the SJS, didn't investigate this claim but instead covered it up so he could, if necessary, blackmail Volt. (It was never revealed if the charge was true or not)[2] He later served in the Special Judicial Squad and in the Aliens Bureau. In 2114 he was promoted to chief of Sector 53, where his outstanding administrative ability and judgement reduced violent crime in his sector to the second lowest level in the city.[3]

Sometime in his career, Volt had romantic feelings for someone but repressed them.[4]

When Chief Judge McGruder resigned her office in 2116, there was no Council of Five to choose a new chief judge in the normal way (as she had dissolved the body years earlier). Therefore she ordered that her successor be elected by the city's 400 Senior Judges. After careful consideration, Volt decided to stand as a candidate in this unprecedented election, and polled a clear majority of the votes (208), defeating three other candidates, including Judge Dredd himself. (Ironically most people had believed that Dredd would win, but – as Dredd himself observed – he had annoyed too many judges over the years. Dredd even voted for Volt himself!)[1]

Volt immediately set about instituting significant constitutional reforms. He reinstated the Council and permanently established the new system of electing chief judges. In 2117 he restored the obsolete office of Mayor of Mega-City One and created a council of elected citizens to give the people more say in how they were governed (although ultimate power continued to reside with the Justice Department), [5] as well as forcing mandatory eight-hours off work and an annual 24-hours off a year for the Judges. (Dredd thought little of the mandatory 24)[6] He also established a policy of encouraging the judges to foster better relations with the community.[7]

One of his early acts was to get to grips with "the Pit", sending first Judge Rohan and later Dredd in to clean up the sector.

During his career he was the author of two books: Riding the Apocalypse, a history of the Apocalypse War,[8] and Just Justice in 2117, setting out his ideas for legal and political reforms.[7]

In many ways Volt proved to be an outstanding Chief Judge and Dredd saw him as the right man for the job - to the extent of being unsure if he wanted to bring up the unlawful killing charges against Volt when he learned about them. (In the end, he decided they must be untrue) Cassandra Anderson, in contrast, had poor relations with Volt as the two clashed over his hardline actions. In one of his more shameful moments, he had dealt with an exodus of Mega-City One's children by having a missile shot at the mutant that was contacting them - killing a number of children in the process. [9] In 2117, a group of embittered Judges attempted to assassinate Volt for attempting closer relations with East-Meg Two. [10] 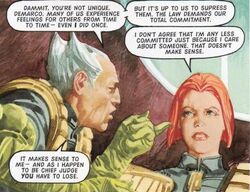 Volt had to reprimand Galen DeMarco for not repressing her feelings and when she refused to accept she'd been wrong, he sentenced her to re-education. Instead, she resigned. Dredd attempted to convince Volt to change his mind but the chief berated him for both trying to lecture him when Dredd had passed up the Chief Judge role himself and for not reporting the DeMarco incident as he should have.

When the city was overrun by Nero Narcos in the Second Robot War of 2121, Volt blamed himself for having failed to do enough to prevent it. Even when the war was ultimately won, the burden of personal responsibility weighed too heavily on his mind for him to bear. He waited until the bitter end, and then at the moment of victory he shot himself.[11]

But the general public would never be told the truth. Acting Chief Judge Hershey decided that in the aftermath of such a cataclysmic conflict the Judges' interests required a more heroic death for their fallen leader. The Public Deception Unit therefore set about concocting a false story in which Volt had died valiantly in combat, and fabricated the evidence to prove it. While leading the service for Volt, Hershey said she felt he'd blamed himself too much when many others shared the blame - while pointedly looking at Public Surveillance Unit chief Jura Edgar. [8]

Hershey would succeed him in 2122.

Retrieved from "https://judgedredd.fandom.com/wiki/Hadrian_Volt?oldid=11407"
Community content is available under CC-BY-SA unless otherwise noted.