Judge Dredd Wiki
Register
Don't have an account?
Sign In
Advertisement
in: Mega-City One Judges, Chief Judges, Characters,
and 5 more

In early strips, she sometimes had earrings with a stylised 'death's head' on them.

How old McGruder was is never explicitly stated. The book Silencer described her as "in her fifties" around the time of "Wilderlands" but she was usually treated as older than that in her second term.

Judge McGruder worked her way up to running the SJS after Cal's defeat. The new Chief Judge, Griffin, entrusted her with the responsibility of rebuilding the SJS and restoring its integrity. She purged it of suspect Judges and put in safeguards to prevent the organisation from going rogue again, including greater briefings for the Chief Judge and Council of Five. (Underhandedness and bully-boy tactics were, of course, still the day-to-day tactics.) [1]

She served on Griffin's Council of Five representing her Division and in 2103, she was one of the voices against Dredd's decision to abandon the Judge Child. She even went as far as to say Dredd's very judgment was in question. Not long after, she weighed in on whether the gameshow Any Confessions? was encouraging crime and was in favour of it remaining on the air - changing her mind a minute later when people wanting on Any Confessions? shot Deputy Chief Judge Pepper.

In the first hours of the Apocalypse War, McGruder was missing and presumed dead. She later resurfaced to fight the East Meg One forces, despite a bad head wound. As the only surviving Council member, she replaced the deceased Griffin as Chief Judge by default.

The first two years of the McGruder Justice Department was spent trying to restore the wrecked city: her first order was compulsory work assignments to all surviving citizens. Her mind changed about Dredd and she kept him as a close adviser. In this first term she established herself as one of the city's most able rulers as she succesfully rebuilt the war-torn city and swiftly restored it as a galactic power.[2] During her first reign, the Dark Judges made their third attack on the city and McGruder was forced to resort to calling out Citi-Def. [3]

McGruder resigned after four years in office following the Seven Samurai, blaming herself for a massacre she thought she could have prevented - her final act was to dismiss the three Council members who disagreed with her decision, saying this proved they were incapable of proper judgement! She took the Long Walk into the Cursed Earth, leaving the replacement Council of Five to decide on the new Chief Judge.

Four years in the Cursed Earth had had a damaging effect on her mental health, leaving her with a volatile temper, cruder mannerisms and (it was implied) a degree of multiple personality syndrome as she began referring to herself as "we" and arguing with herself[4] (this would be quietly accepted as a 'royal we' by Justice Department). She also looked visibly older and her facial hair began to grow unchecked. (A Senior Judge raised the issue of the beard early into her reign - she said she'd "take it under consideration", then kept it until deciding to shave on New Year's Eve, 2114).

In 2112 she ran into Dredd during the Necropolis crisis (ambushing his transport on assumption it contained criminals) and returned with him to fight the Dark Judges. With Chief Judge Thomas Silver missing and presumed dead, she subsequently returned to the office of Chief Judge as the only viable candidate.

Her first task was to once more get the city and Judge force back on their feet, as well as to deal with all the dead. She decided not to appoint a new Council of Five, but instead take advice from any and all Senior Judges when the time came; in an early such discussion, on Dredd's advice, she agreed to a public referendum over whether the Judges should continue to rule the city. She also shut down Judge Grice's attempts to undermine her authority, accusing him of under the Dark Judge's control due to personal weakness.[5]

The circumstances of her return to office caused a constitutional crisis in the following year, when an undead Silver returned to reclaim the office which he asserted was rightfully his. The dispute was settled by Dredd himself, who ruled in Silver's favour before executing him for gross dereliction of duty during the Necropolis incident.

She would go on to lead Mega-City One during the Judgement Day crisis, personally fighting the zombie hordes on two occasions (mainly out of boredom with discussing the crisis) and coming up with the strategy for the pivotal Radlands of Ji mission. (Unaware Judge Smiley had survived the crisis, she placed Judge Bachmann in charge of Black Ops Division) Barbara Hershey served as a close advisor, being acting Chief Judge in her absence during Judgement Day. In foreign policy, she carried on a period of glasnost with the Sov Block until the assassination of Supreme Judge Traktorfactori; having Dredd cut off the sugar supply from the Pan-Andes Conurb (and commit regime change); initiated better foreign relations with Luxor; and brought Murphyville into the Judicial Charter. In outer space, she was in office when the Klegg Empire saw Mega-City One as vulnerable and invaded its colonial space in the Spiral Arm.[6]

However, following Judgement Day her second term became increasingly beset with doubts about the quality of her leadership and her sanity. Med-Judges were aware that she had severe lesions on her brain but kept it quiet due to her rank.[7] To cover up the losses of Judges from the recent crises, she began a programme of robot Judges which went disastrously wrong and caused dozens to be killed. In the same day the robots were stopped, she ordered compensation to be paid and the robots fixed so they could be used again - leading to more deaths at the hands of the renegade Number Five. [8] Despite this, she ordered the creation of Mark II Mechanismo's in 2115 and ignored the subtle objections of the senior Judges. This caused Dredd to openly question her command - something she dismissed.

While Dredd would have increasing spats with her, without a formal body like the Council of Five there was no way to genuinely check her if she would not listen to advice.

During her deteriorating leadership, the SJS often took great liberties on the assumption that, as a former member, McGruder would take their side (Spiegl even telling Dredd this after a Random Physical Abuse got two SJS Judges accidentally killed), and McGruder did once remark an attempted coup wouldn't be coming from SJS as she still had "a lot of friends" within it. [9] One early instance in 2114 had SJS Judges forging assassination orders from her to 'cleanly' kill citizens. When this was exposed by Hershey, McGruder - still more in control of her faculties at this stage - threatened a senior SJS Judge under suspicion to stop it or face consequences. [10]

She also oversaw an attempt to remotely control the alien dune sharks in the Cursed Earth, though even the scientists working on this had no idea why she wanted it done and neither did she.[11] The North-West Hab Zone ended up as a dumping ground for the less able Judges under her watch.[12]

In 2116, figures within the Wally Squad tried to have McGruder assassinated due to her conduct. When Dredd uncovered it had been a Judge, McGruder asked if he'd like the hit succeeding and went on to question if Hershey may have done it (considering Shenker to lack the guts).[13] Shortly after, a parallel universe's psychic invasion caused various Judges to mentally deteriorate and start sporadically acting like their counterparts; the impact on McGruder, who had become ever more paranoid and was deliberately trying to 'prove' it was Dredd who was unstable, was initially not noticed. She had also become deeply paranoid about Hershey (correctly so as Hershey was working to try and depose her).[14]

A deputation of senior judges - including Dredd, won over by the discovery she was attempting to reinstate Mechanismo again - attempted to persuade her to reform the Council (with a view to then removing her from office). They were unsuccessful as she realised they'd try to do away with her and went on the attack, including, in anger, making it clear everyone knew Hershey was herself after the job. Her trump card was to reveal Dredd had broken the law by sabotaging the Mechanismo project and have him arrested, taking the wind out of the conspiracy's sails.

She went on a diplomatic visit to the colony Hestia, taking Dredd as her prisoner officially on grounds he could be dropped off at Titan later but really to pressure him into coming around to her ideas. The diplomatic visit was a failure as McGruder continued to deteriorate and embarrass herself in front of the Hestian government, and failed to sell Mechanismo units to them. Indeed, on two separate occasions when the local wildlife threatened her, the robots took no action - their programming told them her madness was a threat to the city and she had to die. In the end, they crashed the transport craft in the Hestian wilderlands. 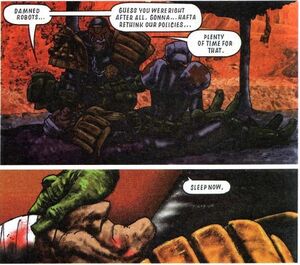 McGruder received a head injury in the crash and went into a life-threatening coma, with her last command to put Dredd in charge of keeping everyone alive. When the Mechanismo were exposed as her would-be assassins, she pardoned Dredd, scrapped the project (and demoted its overseer Greel to Traffic just to be on the safe sde), and agreed to stand down from office. On her way out, she ordered that her successor would be elected by the senior Judges; this would become the new way of appointing the Chiefs.

She was succeeded by Hadrian Volt.

Declining to take the Long Walk again, she became a civilian and decided to write her memoirs. She embarked on a lecture tour but this took a toll on her health, and in late 2117 she was rushed to hospital and found to have severe Alzheimer's. When Dredd visited her in hospital, she could not remember why he was in the room from minute to minute and was unaware she'd retired.[15]

Her mental health rapidly deteriorated even further. When Judge Dredd heard that she had been scheduled for compulsory euthanasia he abducted her - by this point, McGruder was unaware of anything around her and easily convinced she was a serving Judge on a mission - and led her to a more honourable death fighting criminals in the Cursed Earth. The facts of her death were covered up.

A Mega-City One battleship and a street were named after her in her honour. In 2128, the city's new K3000 Superheavy-Class Tac-Wagon was nicknamed the McGruder (as it 'took no stomm').

Hershey considered that McGruder had been too easily intimidated by Jura Edgar.[16]

In 2140, an aging Chief Judge Hershey was left disquieted by the discovery of a facial hair, muttering "McGruder" to herself. The comparison was made more apt when, as with McGruder, Dredd publicly denounced her authority. [17]