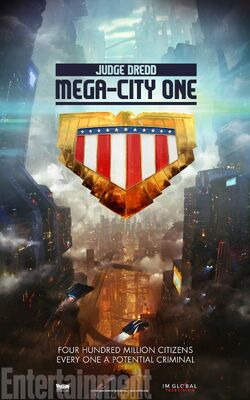 Judge Dredd: Mega City One is an upcoming TV Series produced by IM Global and Rebellion. It is based on the character Judge Dredd created by John Wagner and Carlos Ezquerra[1].

“The first, ‘Democracy March’, shows the suspended streets packed with people amidst the Mega-City skyline (including the Statue of Liberty). The title may well be a reference to the events of ‘America’, one of the Judge Dredd comic series’ most well-loved storylines, which tackled some incredibly heavy themes, and saw a major change in Dredd’s depiction.”

The second piece of art, ‘Lowlife Arrival’, shows the deepest levels of Mega-City One. The original ‘Low Life’ comic storyline followed Judges operating in Mega-City One’s slums, and those imposing headlights might well show them turning up to do the same.”

Add a photo to this gallery

Add a photo to this gallery

Retrieved from "https://judgedredd.fandom.com/wiki/Judge_Dredd:_Mega-City_One?oldid=11022"
Community content is available under CC-BY-SA unless otherwise noted.