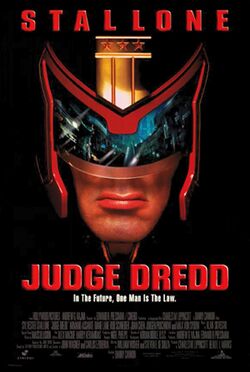 Judge Dredd is a 1995 live-action, big budget adaptation of the 2000 AD flagship character. The film whilst mostly being its own story has certain plot points from various Dredd storylines, predominantly "The Day The Law Died", as well as "The Judge Child", "The Return of Rico" and "Block Mania".

Due to logistics of how movies are marketed with stars like Sylvester Stallone, the character removes his helmet for a large portion of the film.

In the 3rd millennium, much of Earth has become an uninhabitable wasteland. The majority of humanity resides in huge Mega-Cities, where the traditional justice system has been replaced by a corps of Judges whose role combines those of police officer, judge, jury, and executioner. The most dedicated "Street Judge" in Mega-City One is Judge Dredd, who assists Judge Hershey in ending a block war. Herman Ferguson a hacker recently released from prison, is caught in the firefight and hides inside a food dispensing robot, only to be arrested by Dredd and sentenced to five years' imprisonment for tampering with city property.

Rico Dredd, a former Judge turned psychopathic murderer, escapes from prison and reclaims his Judge's uniform and "Lawgiver" gun as well as a decommissioned combat robot. A news reporter critical of Dredd is soon murdered, and Dredd is the chief suspect. Hershey acts as Dredd's defense lawyer in a trial before a tribunal of Council Judges including Dredd's mentor Chief Justice Fargo and Judge Griffin. Dredd is found guilty based on DNA evidence: The Lawgiver encodes the DNA of the wielder onto each round fired, and the DNA from the murder weapon matches Dredd's. Fargo steps down as Chief Justice, asking as his last request that the Council spare Dredd's life. Dredd is sentenced to life imprisonment while Fargo embarks on his "long walk", a tradition in which a retiring Judge ventures into the "Cursed Earth" wasteland "to bring law to the lawless". Griffin, who freed Rico and had him frame Dredd for the murder, succeeds Fargo as Chief Justice and instructs Rico to sow chaos throughout the city.

Dredd finds himself seated next to Herman Ferguson on a transport ship to the Aspen Penal Colony . While passing over the Cursed Earth the ship is shot down by the Angel Gang, a family of cannibalistic Mutant scavengers who capture Dredd and Herman. A squad of Judges tracks Dredd to the Angel Gang's camp and a battle ensues. Fargo arrives just in time to save Dredd's life, but is mortally wounded by Mean Machine Angel. Before dying, Fargo reveals the secrets of Dredd's past: Dredd is the result of the Janus project, an experiment in genetic engineering intended to create the perfect Judge. DNA from the Council Judges was combined to create two clones, Dredd and Rico.

Both were given artificial memories of childhood, and they became close friends. However, while Dredd became the ideal Judge that the Council hoped for, Rico's personality twisted and he instead became the perfect criminal. Dredd was forced to judge Rico guilty for murdering civilians, but instead of being executed Rico was sent to Aspen by Judge Griffin. Since he and Rico share the same DNA, Dredd deduces that Rico framed him for the reporter's murder. Fargo concludes that Griffin is trying to reactivate the Janus project, and begs Dredd to stop him.

Back in Mega-City One, Rico creates panic by assassinating 108 Judges in two days. Griffin uses this to convince the Council Judges to unlock the Janus files, but when they refuse to reactivate the program he has Rico kill them. Arriving immediately after this, Dredd and Herman are accused by Griffin of murdering the Council. They evade the Judges and seek help from Hershey, who has been investigating Dredd's past. Dredd tells her about the Janus project, and the trio head to the Janus laboratory at the Statue of Liberty.

Rico betrays Griffin, having the robot kill him, and replaces the DNA for the Janus clones with his own. Herman uses his hacking skills to save Dredd and Hershey from the robot. Rico orders his clones activated prematurely, but they are incomplete and unable to stop Dredd. Dredd pursues Rico to the top of the statue, and after a final struggle sends Rico falling to his death. Central, the city's controlling supercomputer, has recorded the entire event and broadcasts the information, clearing Dredd's name. The remaining Judges ask him to become the new Chief Justice, but Dredd turns it down, preferring to remain a Street Judge.

The Making of Judge Dredd

The Art of Judge Dredd

2000ad adaptation
Add a photo to this gallery

Certain elements of the film were altered from the comic series, but it still failed to find wide mainstream appeal and as a result was a critical and commercial disappointment.

Thirteen years after the release of Judge Dredd, Sylvester Stallone discussed his feelings about the movie in an issue of Uncut magazine in 2008:

“I loved that property when I read it, because it took a genre that I love, what you could term the 'action morality film' and made it a bit more sophisticated. It had political overtones. It showed how if we don't curb the way we run our judicial system, the police may end up running our lives. It dealt with archaic governments; it dealt with cloning and all kinds of things that could happen in the future. It was also bigger than any film I've done in its physical stature and the way it was designed. All the people were dwarfed by the system and the architecture; it shows how insignificant human beings could be in the future. There's a lot of action in the movie and some great acting, too. It just wasn't balls to the wall. But I do look back on Judge Dredd as a real missed opportunity. It seemed that lots of fans had a problem with Dredd removing his helmet, because he never does in the comic books. But for me it is more about wasting such great potential there was in that idea; just think of all the opportunities there were to do interesting stuff with the Cursed Earth scenes. It didn't live up to what it could have been. It probably should have been much more comic, really humorous, and fun. What I learned out of that experience was that we shouldn't have tried to make it Hamlet; it's more Hamlet and Eggs..." 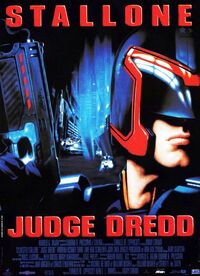 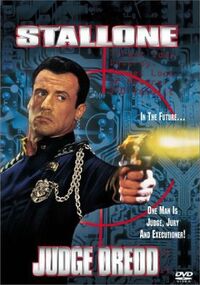 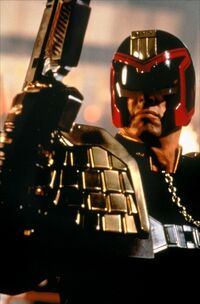 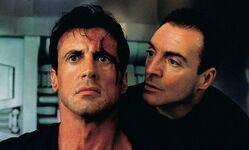 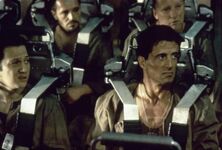 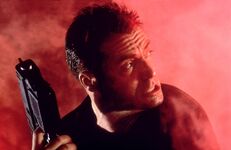 Add a photo to this gallery
Retrieved from "https://judgedredd.fandom.com/wiki/Judge_Dredd_(1995_film)?oldid=12170"
Community content is available under CC-BY-SA unless otherwise noted.