Start a Wiki
Judge Grice was a corrupt Judge and two-time enemy of Judge Dredd. 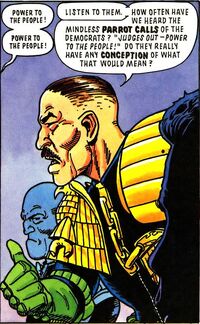 Grice was a distinguished and charismatic Senior Judge in Mega-City One. During Necropolis in 2112, he had been one of the thousands brainwashed into serving the Dark Judges and was responsible for an unknown number of deaths.

In a meeting of Senior Judges after the crisis, he and his colleagues were left unimpressed with the mental state of the returning Chief Judge McGruder and he made disparaging comments about her during her talk. When he was called out, he cheerfully mocked her in front of everyone - only to get startled and upset when she accused him of being brainwashed due to cowardice.

He went on to advocate a tightening of judicial control in the face of public outrage at the Justice Department's failures during Necropolis. At this point in time, he was still sane enough to go against a colleague's demand for more executions and less prisoners. However, Judge Dredd persuaded McGruder to permit the citizens to vote in a referendum about whether the Judges should continue to rule the city or if democratic government should be restored. Grice was left outraged and argued against it: when he pointed out Dredd was "outvoted", Dredd snapped back "you don't believe in voting, Grice" and forced his view on the rest of the judges.[1]

This controversial scheme was unpopular with many judges, and Grice assumed that the result was a foregone conclusion: the people would vote to remove the Judges from power. Firmly believing that this would result in total chaos, Grice formed a conspiracy with half a dozen other Judges to prevent the referendum from happening. They planned to assassinate Dredd, reasoning that since he was almost the only judge who believed that the Judges could win the vote, then without him all support for the referendum would disappear and McGruder would cancel the project.

Dredd survived the attempts on his life, personally killing two of the conspirators and quickly rounding up the others. In a rare lapse of regard for the law, Dredd actually assaulted Grice after taking him into his custody, since he believed that the people would vote to keep the Judges in office because of their reputation for integrity, but that once the people heard about Grice's crime that myth would be dispelled and the Judges would consequently lose the vote. Grice attempted to defend himself but was defeated, a humiliation he would never forget.[2]

Grice was summarily sentenced to twenty years of hard labour on the penal colony on Titan. While conditions on Titan were harsh to begin with, in the 2110s it was being run by the monstrous Governor Khurtz. Prisoners were given cybernetic breathers without anaesthetic, subject to random brutality by the guards and Khurtz himself, and even experimented on. Grice became bitter and violent, and exercised frequently to increase his strength. He also gained a reputation among the other convicts.

After enduring two years of his sentence, Grice murdered a warden and was sentenced to lobotomy. He feigned suicide, escaped from his cell, and led a mass breakout, personally killing Khurtz in his rampage. An army of hundreds of convicts followed him on a fleet of stolen spaceships. Grice also stole a biological weapon, the flesh dissolving "Meat Virus" which had been discovered on Titan and which was being examined by biological weapon scientists.

Consumed with desire for revenge on Justice Department and Dredd, Grice attacked Mega-City One. First the stolen ships were crashd into the city to spread panic and release the deadly Meat Virus on the population; second, he led his forces in a raid of the Grand Hall of Justice, killing any Judge that didn't join him.

Normally his rebels would have been quickly exterminated by the Judges, but they were weakened by the symptoms of the virus, and were forced to retreat to the Cursed Earth outside the city while the rebels wreaked havoc and killed indiscriminately. Chief Judge McGruder was captured and tortured almost to death, and Dredd himself nearly perished in an unsuccessful assassination attempt - Dredd was beaten senseless surprisingly quickly by the new, stronger Grice.

Grice assumed the office of Chief Judge and began passing insane laws which he capriciously changed from day to day. He'd now decided to corrupt and massacre every megacity, all the while fantasising about revenge on Dredd. Even one of his own followers began to question his sanity, and eventually turned on him. Anticipating this, Grice had the traitor killed, but even his loyal comrades were not safe from Grice's wrath: he also publicly executed one of his most dedicated men with a chainsaw, one of the Judges from his original conspiracy to prevent the referendum two years earlier.

However, Grice's men were heavily outnumbered and once the Judges had regrouped from their initial setbacks Dredd led them back on the offensive. Storming the city, they made quick work of the escaped prisoners. Grice had a mental breakdown and began destroying the interior of the Grand Hall of Justice with a flamethrower and shooting his own men. Dredd confronted him personally. Even on this second occasion Grice almost got the better of him, but Dredd repeatedly ran him over with his lawmaster bike, until he was totally crushed.

A year later, McGruder used an image of Grice to demonstrate to Dredd the damage caused by the "Titan treatment".[3]

Under John Wagner, Grice believed he was in the right and was not especially violent or tough - he was swiftly betaen down by Dredd. In the Mark Millar and Grant Morrison Purgatory/Inferno story, Grice was changed into a brutal psychopath that twice was able to beat down Dredd in a single page - while this was partly justified by him exercising in Purgatory, nobody in the comic remarks on the change. (Dredd reacts with anger and concern when he realises Grice is attacking, as if the character had always been violent)

Retrieved from "https://judgedredd.fandom.com/wiki/Judge_Grice?oldid=11547"
Community content is available under CC-BY-SA unless otherwise noted.