The Kleggs are a race of carnivorous alien reptiles, infamous in Mega-City One as the mercenaries that kept Cal in power.

Their ferocity, strange mannerismsm and propensity for eating their foes dominate others' perception of them, but the Klegg Empire is a force to be reckoned with in outer space. Their society is essentially space empire is a rival to Earth's own. A formal education was rare and only for those born into the ruling high caste; rule of the Empire was gained through "time honoured traditions of backstabbing and treachery".[1]

They utilise Klegg-Hounds, alien dogs with crocodilian heads, which track enemies by tasting the ground where they have passed

In 2101, when Dredd's rebellion was on the verge of ousting the insane Chief Judge Cal, the madman hired Klegg mercenaries to bolster his position. The shock of their arrival was enough to turn the tide of one battle. Cal appointed their leader, Grampus, as his new Deputy Chief Judge, and paid them in meat for their services. (Cal had to be discouraged from feeding the citizens to them in case the aliens got a taste for human meat, but they appear to have eaten them anyway)

With their ravenous appetites and their Klegg-Hounds, the Kleggs kept the citizens of Mega-City One cowed and terrorized. Their battle-cry was "Klegg-Hai! Klegg-Hai!" and, in The Day The Law Died, they also preceded this with a war-song: "slicey slicey, oncey twicey, claw and fang'll kill Dredd nicely! Meaty beaty, chop 'em neatly, death or glory no retreatee!". Their savagery meant that when the Judges took back the city, they refused to take the Kleggs prisoner and slaughtered every one they saw.

After Judge Cal's death, the Kleggs were outlawed from Mega-City One; any citizen who sees a Klegg is required to either kill it or report it immediately to the Judges so that they may do so. Although most of them left, some remain, hidden here and there in the ruined parts of the city. Due to bitter memories of the Kleggs, other, more peaceful aliens have found Mega-City One less than welcoming on occasion. However, Sino-Cit Klegg Empire would go on to form diplomatic relations with the Klegg Empire and established "peace fort" bases, jointly run by both sides, at the Kaeli moons that divided Klegg and Sinese space. Neither side's troops seemed to actually respect each other.[2]

In the mid-2110s, when Mega-City One was weakened by back-to-back disasters, a brutal war of attrition broke out between the city and the Klegg Empire in the Spiral Arm. With tens of thousands being killed for no gain, the Space Corps attempted to stage a 'false flag' massacre at a peace fort so that the Klegg/Sino peace treaty would collapse and both sides, assuming the other to be the aggressors, would go to war. The mission failed.[4]

Many years later, a few rare Kleggs have since been allowed back into the city. A blind pop star called Kyly once married the Klegg Justin in Mega-City One as a publicity stunt. The marriage, however, was brief as Justin woke up one morning to find that he had eaten his wife in his sleep, and shortly afterwards he was shot dead by Judge Dredd. [5]

In 2124, the high-born Chorr took command from his uncle Grand Warmaster Grusk after an accident with an alien superweapon.[6]

When the meatmonger aliens visited Earth, they'd already abducted a number of Kleggs and were processing them for food. An escape by the Kleggs helped Dredd bring down the ship.

In 2132, warlord Skull Khan Kirrz was on a war crime trial for committing the Edgeworld Marches atrocities. [7]

A reconstructed Klegg who didn't eat people and got quite upset that people assumed he did was hired as a mercenary by Enormo Overdrive. He was rechristened Sensitive Klegg, given the rank of "Rear Admiral", and drafted by Dirty Frank into stopping the God-City coup in 2134. He would later save Mega-City One again, as well as Dredd, by helping stop the Luna-2 arsenal being used. As a result, he was allowed to live in the city but the constant abuse and pressures almost drove him to suicide, as well as the Hunters Club targeting him for death. In the end, he became a bodyguard for Cursed Earth convoys.

Aimee Nixon and Martin Sinfield approached the Klegg Empire for aid when the ex-convict colony on Enceladus was in danger of collapse. The Empire was intrigued by the idea of taking the base under imperial sovereignty and having a Sol system base & alliance to scare Mega-City One, but decided against it due to a recession in the empire - instead it making it clear they'd arrive when the colony died to devour their corpses.[8]

In 2138, Barbara Hershey approached the Klegg Empire about a peace treaty. The first meeting required dealing with a particularly enthusiastic ambassador and reminding them that a war would be costly for both sides. Unfortunately the ambassador died mid-meal and in order to keep the treaty (to be signed in Sino-Cit) alive and avoid war, Dredd was tasked to track down Sensitive Klegg and have him impersonate the ambassador. This didn't work, but Sensitive Klegg's freestyle poetry and attempt at rapping about how bad war is so traumatised and embarrassed the Klegg monarchy that they capitulated to everything Hershey asked for. [9]

Sensitive Klegg would go on to be a beloved poet in Sino-City and elected to be mayor, and used his connections to help get Dirty Frank out of jail in 2140.[10] 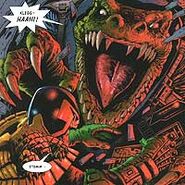