"Make it a part of yourself, an extension of your own arm, and it'll never fail you. I know some Judges so good with the Daystick they never have to draw their Lawgivers"
—Judge Kruger

Judge Nathan Kruger was a street judge with a short temper.

Kruger had numerous complaints of excessive violence against his name, second only to Judge Dredd, and also one of the highest conviction rates amongst the judges. He was also a Daystick fighting champion, having taken out first place at least four years running, and he almost always preferred to use the Daystick as opposed to the Lawgiver gun.

In Judge Dredd Megazine vol. 3 no. 74 (2001), Kruger accidentally kills a woman during a routine inspection by breaking her neck with his Daystick, which is witnessed by her only son, Daniel Falcone. To cover his tracks, he plants a gun in her hands and calls the incident in. Judge Dredd is immediately sceptical, and almost certain that Kruger's violent nature resulted in the woman's death for no good reason. With only the son's word against his, Kruger is transferred to the Academy to train cadets in Daystick combat as the investigation takes place. Dredd, angry at Kruger having escaped justice, challenges him to a Daystick fight, which Kruger accepts, taunting Dredd by labelling him the "old man." 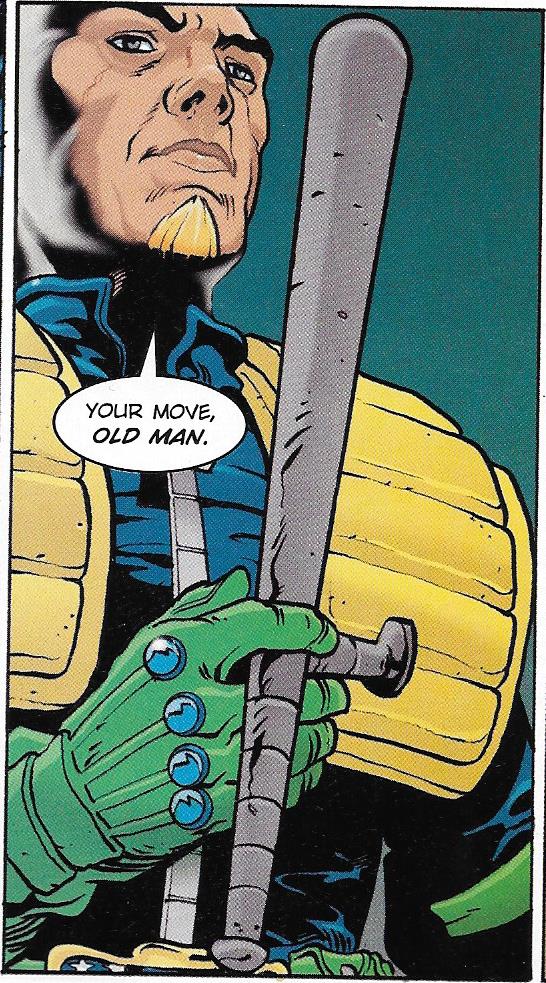 During the fight, both Kruger and Dredd inflict heavy damage upon one another, although Dredd's helmet protects him from several dangerous headshots, and is broken during the process. Dredd eventually defeats Kruger, informing the onlooking cadets that the Daystick is a good way to subdue a perp, but only when used properly, obviously alluding to Kruger's overly enthusiastic use of the weapon. Kruger's prominence lies in the fact that, although Dredd is aware of his guilt, he stands as one of very few characters to have ever escaped Dredd's judgement.

"That's the breaks, Dredd. It's a mean city."
—Judge Kruger, after being accused of manslaughter by Judge Dredd.

Eight years later, Daniel Falcone appeared in his own series, Marauder, in 2000 AD,[42] which also featured Kruger. This revealed that Kruger had been promoted to Sector Chief of Sector 13. He was a highly corrupt figure, in the pocket of crime boss Vic Burnett and using the local Judge force to remove rival criminal operations. He was killed by Falcone in the final episode.

Retrieved from "https://judgedredd.fandom.com/wiki/Kruger?oldid=11710"
Community content is available under CC-BY-SA unless otherwise noted.