Judges from Mega-City One's Justice Department
Manufactured by General Arms, the Lawgiver is a voice-activated machine pistol that serves as the standard sidearm issued to Judges in the fictional world of the Judge Dredd comics. Several designs have been produced, and each is a multi-faceted weapon capable of firing a variety of ammunition from a single cartridge. Due to the high rate at which Judges are killed in the streets of Mega City One, each Lawgiver is equipped with several security features to help prevent one of these illustrious weapons from falling into the wrong hands.

Each Lawgiver has a sensor on its grip that is programmed to recognize the palm-print of the authorized user registered to the weapon. If anyone else, including another Judge, attempts to use the weapon it will self-destruct in the user's hand, leaving them severely crippled or dead. However, recognising that this feature may interfere with a Judge performing their duties in the field, the Justice Department does maintain instructions on how to bypass the security feature. This information is only accessible by Senior Judges and above, and was demonstrated by Judge Dredd when one of his partners was killed during an investigation.

The first sidearm seen used by Dredd and the other Judges. Unlike the blocky, black MK II, the Lawgiver MK I was silver in colour and was much more slender, resembling a rifle scope with a pistol grip. The Lawgiver MK I was a multi-fire weapon capable of using various ammunition types. It had one dorsal (top) and one ventral (bottom) feeding magazine wells and used two double magazines that held 12 rounds on each side (24 per magazine, for a total of 48 rounds). Magazines had to be manually selected and the shooter had to pick between ventral or dorsal feed. Each magazine has a digital counter at the bottom that gives the ammo count in the magazine.

Standard loadout would be 2 "General Purpose" / "Armor-Piercing" magazines, 1 "Incendiary" / "Rubber Ricochet" magazine, and 1 "Grenade" / "High Explosive" magazine. Mixture is usually based on preference, experience, and mission type - but all six types have to be in the load-out. The bullets are gyro-jet projectiles fueled with Argon-88b, an unstable element. The 9-step dial on the side of the weapon shows the round's set velocity level ("1" being slowest and "9" being fastest). This can be automatically set by the gun's targeting computer or manually reset by the shooter. The bullets have a maximum range of 5 kilometers.

At the back of the breach is the "Fast Focus" scope. It aims through the bore to provide the Judge with an exact sight picture. It has a visual range of 200 to 2000 meters and has Tele-Visual, Night Vision, and Infra-Red imaging modes. The HUD in the aiming reticule gives the shooter the target type (human, machine, or robot), velocity level (1-9), ammo type chambered (GP, RR, HE, AP, I, G, or HS), and current magazine capacity (0-12 shots). Target selection was done by a button on the grip controlled by the ring finger and the scope's fine tuning could be done by a wheel on the grip controlled by the little finger.

The Mark I weapon had a strobe-light accessory that could either temporarily blind opponents in low light environments when set on a low cycle or induce seizures when set on a rapid cycle. This feature was discarded on later marks, perhaps because it would harm innocent bystanders. 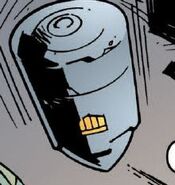 Introduced in 2120, the introduction of the then-new Lawgiver MK II was a bittersweet occasion for the members of the Justice Department.

Many of the first examples had been sabotaged by Nero Narcos, the leader of "The Frendz" crime syndicate, as part of Operation Doomsday. When they received a remote signal, the processors on the new weapons were deactivated. This made the palm-print function not recognize the Judge it was issued to, causing its self-destruct bomb to detonate. This maimed and killed scores of Judges and is seen as the opening event of the Second Robot War (2121).

It was a distinct improvement over the earlier model. All the ammunition is now stored in a single bulk magazine rather than a series of small magazines. Ammo types received a number designation (#1-6) and could be manually selected by using a dial on the side of the gun (replacing the velocity dial on the MK I) or by using a vocal command. Unlike the semi-automatic MK I, the MK II is capable of automatic fire.

The Lawgiver MK II has the following characteristics:

The Lawgiver MK II is capable of firing the following different types of ammunition:

Additionally, this model of Lawgiver also has a built-in Stun-Shot system, which runs on an internal battery pack. It fires a Neuro-Electric Energy Pulse that scrambles the target's nervous system, causing them to faint. The pulse has no lasting side-effects, though it may cause heart failure, epileptic seizures, or permanent Central Nervous System damage. A depleted battery pack can be recharged at a station house or from a Lawmaster's power system.

The MK II also has the capability to fire clip-on Fragmentation, Stumm Gas, or Tranq Gas grenade shells. They can be fired in either indirect- (arced trajectory) or direct-fire (flat trajectory) mode. The MK II can also fire a drug-filled Hypodermic Needle (Hypo) round. It operates and functions much like the earlier MK I's clip-on Heat Seeker round. It must be aimed by the operator as it doesn't have the Heat Seeker's lock-on function.

The MK II Lawgiver is also equipped with a "Fast-Focus" viewfinder to facilitate rapid targeting. It also has a built-in motion tracker (useful in total darkness or while blinded) that uses optional audible pings and tones to inform the operator of the location of nearby moving targets.

A silencer is issued that attaches on the muzzle; this renders the round subsonic and dissipates muzzle flash. When the silencer is equipped, the gun's voice module is muted to avoid alerting the target or giving away the Judge's position. While it is used, the Mk.II cannot use Rapid Fire mode and cannot attach Grenades or Hypo-Needle rounds.

A Heatseeker ammo in action.

In the 1995 film, the weapon used by the Judges was a visually modified version of the Lawgiver MK II. This weapon had its magazine in the grip rather than before the trigger. It lacked the Stun-Shot function and didn't have the ability to fire grenades from the muzzle.

The weapon also lacks the Fast Focus scope. Instead, a targeting sensor in a module mounted under the barrel is used to guide the rounds.

At the Academy of Law, Judge Dredd (played by Sylvester Stallone) is seen demonstrating the Lawgiver, which has a 25 round magazine. The ammunition is referred to as "mission-variable" and "voice-programmed". A voice-feature has been included that confirms the type of ammunition the judge selects via voice command. Apparently the ammunition is a generic multi-purpose slug that turns into a specialized type (High Explosive, Armor-Piercing, etc.) when it is verbally designated by the operator. The High-Explosive round was called "Grenade". There is also a new "Signal Flare" ammunition (though it might be a different name for the Incendiary round). The anti-tampering booby-trap differed in that it gave a lethal shock rather than detonating an explosive charge in the grip. Also, each bullet fired from the Lawgiver is tagged with the DNA profile of the Judge who fires it, thus making identification of the shooter possible when slugs are recovered from the victim.

The Lawgiver was a metal shell built around a Beretta 92FS. The Rapid Fire mode was achieved by using an electrically-powered device that was fired offscreen by a technician for safety reasons.

The Lawgiver in the 2012 film Dredd resembles the MK II model. So far it is the most realistic depiction of all the Lawgivers seen. It has three fire modes: Semi (Semi-Auto), Rapid Fire (Full-Auto), and Silenced (Semi-Auto). It also has a digital screen that indicates what fire-mode the pistol is in, the range to the target, how much ammo there is in the magazine, and what type of rounds are to be fired. (E.g. when Dredd commands "High Ex", the display says "HIGH EX", showing that "High Explosive" has been selected).

The DNA sensor in the pistolgrip only allows access to the Judge it is registered to. If an unauthorized user tries to fire it, the screen will show an "I.D. FAIL" message. Then an explosive charge in the weapon will explode and blow their forearm off.

The screen readout shows that a full magazine supposedly carries 50 FMJ (Full Metal Jacketed, or "Standard" ammo), 25 AP (Armor-Piercing), 25 IN (Incendiary) and 25 HE (High Explosive) rounds. The "D" reading in the lower left-hand corner is the distance to the target in meters. If the magazine is near empty (at 10% or less), the screen will show an "AMMUNITION LOW" warning.

The "Hot Shot" round used in the standoff in the beginning of the movie, although carrying the nickname of the Heat Seeker round, is an Incendiary bullet. Dredd empties a magazine-full of Incendiary bullets during his counter-ambush of the Ma-Ma Gang.

The "Silencer" used in Silenced Mode was an integrated unit in a sleeve built around the barrel that extended over the muzzle. The gun's verbal confirmations are shut off while in Silenced Mode to preserve stealth and surprise.

Described as a variable ammunition sidearm, it has the following features:

A closeup of the digital display on the side of Dredd's Lawgiver. The weapon appears to be set to semi-automatic ("SEMI") fire mode, shows an inactive integrated rangefinder (D for "Distance" with the readout at 0.0) and gives readings for the ammo loads for armor piercing ("AP"), incendiary ("IN"), high explosive ("HE") and standard full metal jacket ("FMJ")

Close-up of the text engraved in the Lawgiver

Dredd firing an Incendiary round

A close up shot of the Lawgiver in "Silencer Mode."

In a special feature of the Dredd DVD, it is revealed that the Lawgiver used in the film uses three separate high-capacity magazines housing separate kinds of ammunition simultaneously, as opposed to the comics where all kinds of ammunition are fired from one universal magazine. This culminates to a moment in the film where Dredd's Lawgiver runs out of all forms of ammunition except for High Explosive rounds. The Lawgiver was a suppressor-equipped Glock 17 pistol (some converted to fire fully automatically) in a metal shell with an LCD screen built into the left-hand side.

This is significant because of police all over the world trust Glocks, which are modern, polymer-framed guns. Therefore, they are more appropriate for use in a futuristic movie. The weapon's prop magazine well in front of the trigger took a mocked-up magazine full of inert projectiles; the pistol's real magazine in the grip was loaded with blanks. The armorers for the film specifically constructed the Lawgiver shell to function like a real firearm, including how the magazines changed around to separate ammunition supplies. While firing only the back part of the slide cycled, much faster than the 1995 Lawgiver.

Below you can see the transformation from Glock to Lawgiver MK II.