A Lawmaster is a Judge's primary form of street transportation.

It is a type of futuristic, heavy-duty motorcycle. It is regulated by a computer with limited artificial intelligence. They are shown to mount machine guns with brass catchers, carry Widowmakers and have communications capabilities, allowing Judges to relay information to and from a control center at the Grand Hall of Justice, crowd control capabilities and carry equipment for securing and investigating crime scenes. In the comics lawmasters are fitted with robot brains so that if necessary they can work on their own and respond to voice commands relayed by the Judge's radio helmet. 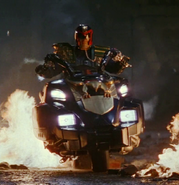 A Lawmaster in Predator vs. Judge Dredd vs. Aliens

Add a photo to this gallery
Retrieved from "https://judgedredd.fandom.com/wiki/Lawmaster?oldid=12417"
Community content is available under CC-BY-SA unless otherwise noted.