Sensitive Klegg was a Klegg (Named by an undercover Dirty Frank) who worked as a security gaurd for Enormo Overdrive at Overdrive Inc. He was granted citizenship to Mega-City One after saving Dredd, however he currently resides in the Cursed Earth.

Sensitive Klegg was similar in build and appearence to the others of his species. However he wore hippie-like clothing to replicate his peace loving personality.

Senseitive Klegg was a very atypical member of his species who unlike his sadistic, bloodthirsty and largely unintelligent species he was kind, peacefull and rather intelligent. However peoples reaction to his beastial appearence and being ignored by the people he considered freinds caused him to contemplate suicide. He did find happines eventually. 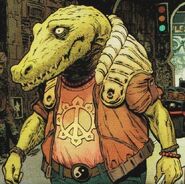 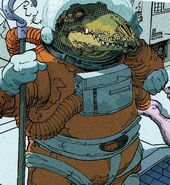 Add a photo to this gallery
Retrieved from "https://judgedredd.fandom.com/wiki/Sensitive_Klegg?oldid=10087"
Community content is available under CC-BY-SA unless otherwise noted.