Edit
watch 01:54
Obi-Wan Finale - The Loop
Do you like this video?
Play Sound

Slo-Mo is a fictional drug featured in the 2012 film Dredd.

Slo-Mo was manufactured in the Peach Trees building located in the Peachtree Block of Sector 13 by the Ma-Ma Clan. The Drug was first invented by chemist and old time friend of Madeline Madrigal: Eric, as was revealed in the Dredd 2012 prequel comic: Top of the World. Slo-Mo is a caramel-colored liquid that comes in a white inhaler with a clear capsule. The white inhaler has a heart on it to mark the Ma-Ma Clan.

The drug appears to slow the users perception of time to 1% of its normal speed. It also makes the user see colors more vividly, and appears to have a euphoric effect. Using a Slo-Mo inhaler results in the mouth of the user suffering from freezer burn. It also (as a by-product) prolongs any feelings of pleasure or pain that the user feels at the time of taking it. Additionally, the user's irises become briefly illuminated likely indicating the drug has taken immediate effect. 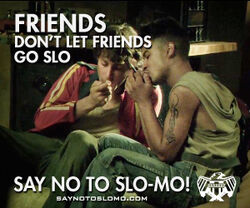